In the process of data enrichment using logstash it is pretty common to use the translate filter to add new fields in the documents based on the value of an existing field, to do that we use a key-value dictionary and if the key that we are searching exists in the dictionary, the value of this key will be added as a new field.

Although the translate filter is very flexible, it has some limitations that could make its use difficult or not possible at all, like for example when we have a very large dictionary or when we have multiple logstash instances running the same pipeline.

As an alternative we can store the dictionary data in a memcached instance and make queries using the memcached filter in logstash.

Memcached is a key-value in-memory database which is commonly used to speed-up web pages, create cache of data and help with the database load of some systems.

It is an open source tool, it is very simple to install and configure and also has managed versions provided by the most common cloud services.

We can insert and query data in memcached using some of the many libraries that exist for a variety of languages, in the case of logstash we do that using the memcached filter.

With the memcached filter in logstash we can insert data in a memcached instance using the SET option and query data using the GET option.

To insert a key in memcached we can use the following configuration.

In the option hosts we can specify the memcached instance address, which in this example is the 10.0.1.21 server using the default port, 11211.

To query keys in memcached we use the following configuration.

The following pipeline creates a key named exemplo inside memcached with the value of the field origem and in the sequence we make a query for the same key and store the value in a new field called destino.

To confirm that the value is in memcached we can use the ruby library dalli, the same one used by the logstash filter, to query the key.

The process of data enrichment using the translate filter is very similar to when we use the memcached filter, the choice between one or another is entirelly based in the infrastructure used and the use cases.

One use case where is an advantage to use the memcached filter is when we have a large dictionary, with hundreds of MB. If we use the translate filter we probably would need to increase the size of the heap memory of the logstash process and the startup and reload times could cause a great impact in the ingestion process.

Using memcached in this case would allow us to make the process of loading and updating the dictionary completely independent of the logstash process.

Other two use cases where we could use memcached instead of translate are:

In the first case, when we have more than one logstash instance doing the data enrichment process, using the translate filter implies in having to update the same dictionary file in every instance or create a network share with this file. If instead we use memcached we would need to create and update the dictionary file in one place and would avoid having to create a network share.

In the second case, when the dictionary used in the data enrichment process is created or updated by external tools like python or ruby scripts, using the translate filter would also make necessary to grant read and write permissions to the .yml file with the dictionary, which could not be possible in some cases and which would add some security issues.

With memcached we would only need to allow the external tool to connect to the memcached server. 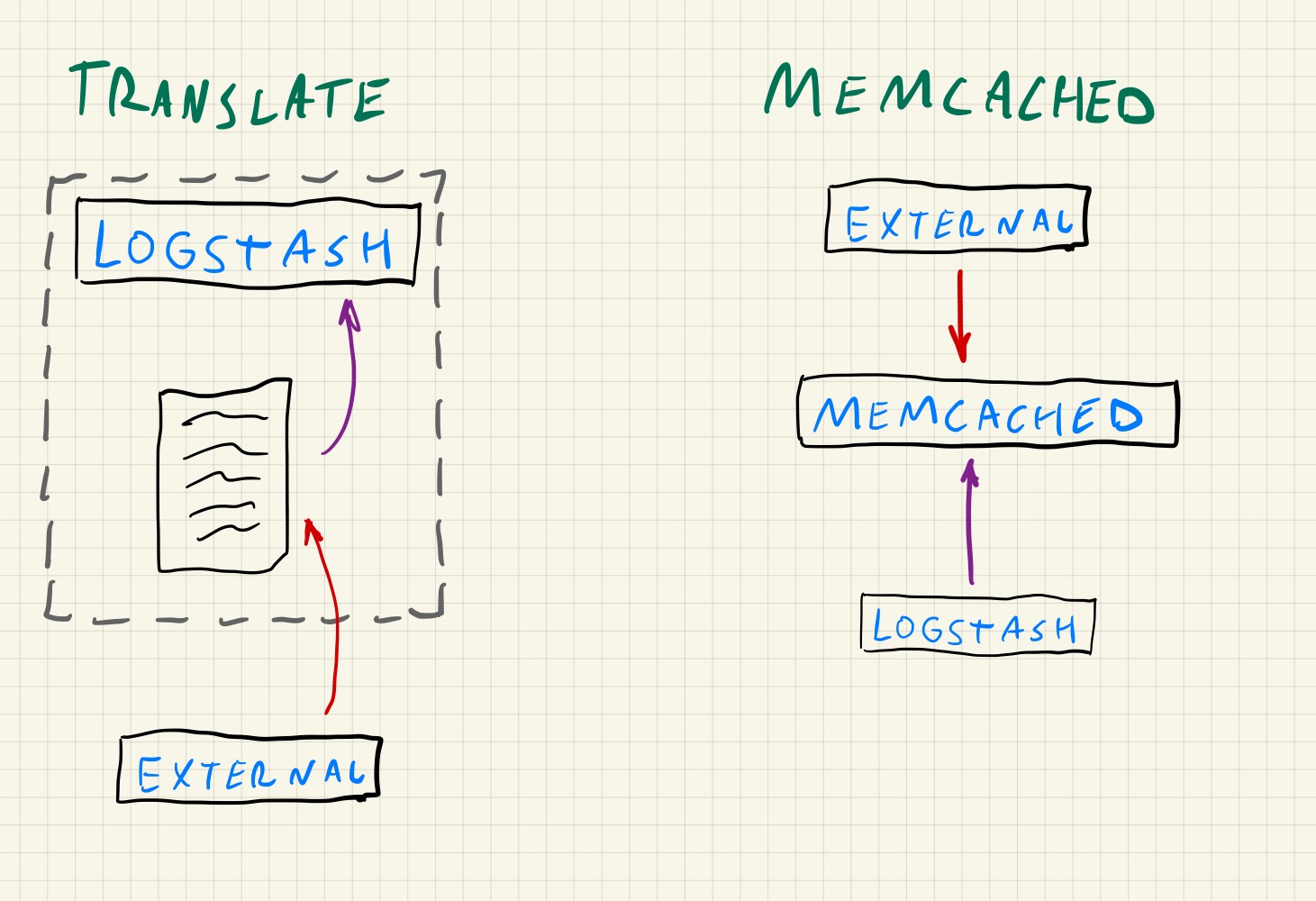 The documentation for the memcached filter can be found in in link.

This post was originally written in Portuguese and later translated into English, some example field names and messages were kept in Portuguese.